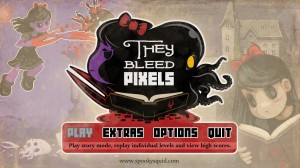 Welcome to Day 02 of Half Hour of Power! After some discussion about yesterday’s format, or rather my lack of adherence to said format, I’m going to try something more akin to my original intention for this review. I relegated to myself to exactly fifteen minutes of playtime (exactly enough time for me to finish the first level) and will attempt to be more focused and succinct in this review. Additionally, review isn’t really the proper word for this particular article, as I will be focusing on what stood out most to me during my play time with They Bleed Pixels. It’s more a deconstruction of a particular design element.

First, I would like to preface by stating that I’m unsure as the correct speed the game is supposed to be rendered in. About 3/4 of the way through the first level, I experienced a sudden burst in speed for seemingly no reason. It only lasted for a few jumps and then subsided. The amount of textures on the screen was definitely lower than throughout the rest of the level, so I closed everything, restarted my computer, and just ran the game. I was met with similar results. I find it hard to believe my laptop is that terrible considering this game sells itself as “lo-fi”, but maybe there’s a setting I’m missing. Regardless I won’t count the speed of gameplay against They Bleed Pixels since it appeared the sluggishness was merely a hardware issue on my end.

Also, before I jump into the meat of this article, I have to say that the presentation for this game is incredible. The comic book “cutscenes” and the musical stylings of DJ Finish Him make for a delightful fusion of morbid and moe-esque design. I also thoroughly enjoyed the references to classical literature and the idea that the levels are taking place inside the “Book” itself. Very well done. 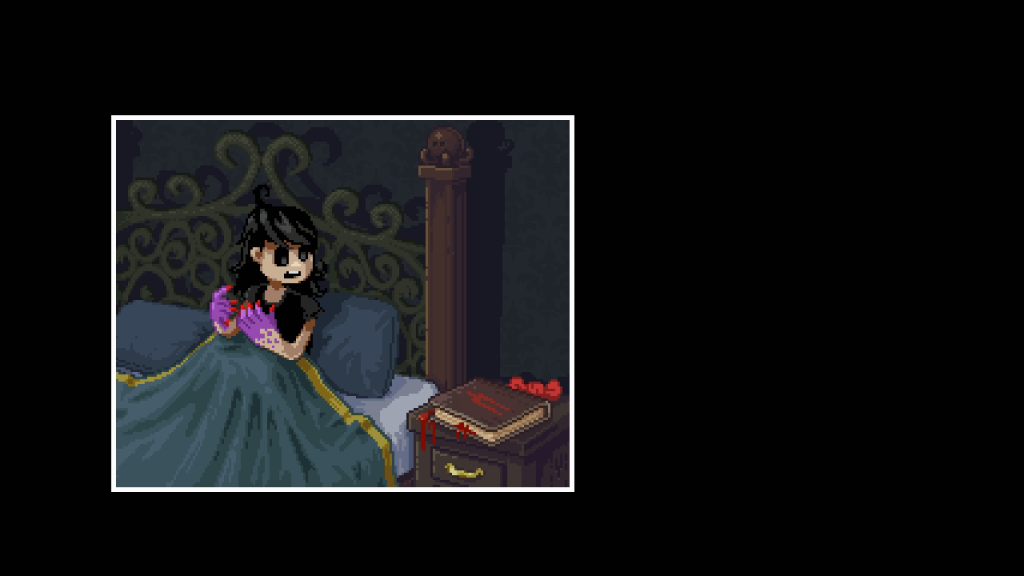 Now, onto what I noticed most about They Bleed Pixels. The trailer for the game emphasizes it’s “1-button combat” as, presumably, a unique way to avoid the rigmarole of combo-based brawlers. The problem is that it simply doesn’t work with the speed this game is purporting with it’s level design. There’s a reason as games progressed in complexity and depths more buttons were added to controllers. By limiting your field of design by constraining every attack command into one button, the other saved exclusively for jumping, you force the player into awkward situations. For instance, when your character sprite is standing still and you press attack, you perform a kick that sends enemies flying some distance away. This is should be great tool for knocking enemies off of ledges into spikes, but instead often times I found myself simply attacking the enemy (since the standard attack is forward + B), breaking the flow of gameplay. Granted, I’m not entirely sure this the control schemes fault or if it has to do with the animations not canceling properly, but there’s more. In order to launch the enemy into the air, you must hold B. Generally speaking, if you “tap-hold” (as in hold B just long enough for the launch animation to begin) B, the enemy will barely be lifted above your head. So, the logically conclusion is to hold B down until the launch animation finishes. However, in all my experience testing this, the enemy wind-up for his attack animation finished before I could complete the launch animation. Meaning that I never got to fully launch an enemy unless I caught him completely unawares, usually by jumping over him. This, to me, just exacerbates an already flawed control scheme. Mapping launch to Y and kick to X wouldn’t have over-complicated the fighting system. It also wouldn’t have detracted from nimbly comboing your way through multiple enemies. In fact, I believe it would have aided it greatly having dedicated buttons for certain actions and leaving the brawling attributes affixed to just B.

However, my time is nearing its end, and I certainly don’t want to berate the game entirely. As I stated previously, the aesthetic of the title is amazing and is what initially pushed me to purchase it. The level design was also nicely done. It afforded nice platforming challenges, with precision jumping and devilish enemy placement, as well as felt cohesive despite the level being much longer than I anticipated. They Bleed Pixels is probably a game that I will spend more time with, to see if there’s a way to fluidly master this 1-button fighting style, but as of now I feel that the title’s base mechanic unfortunately fell a little flat. That’s all for today.